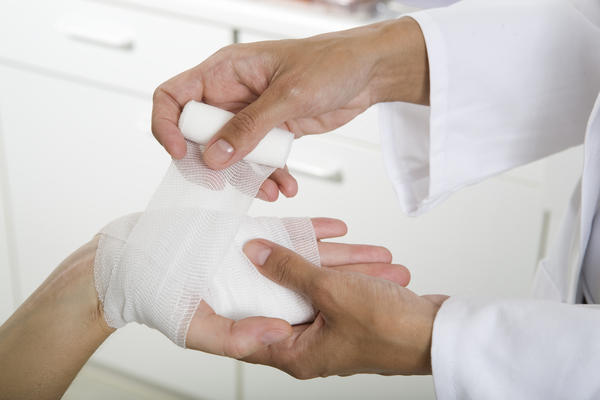 Stevens-Johnson syndrome is a rare, serious disorder of your skin and mucous membranes. It’s usually a reaction to a medication or an infection. Often, Stevens-Johnson syndrome begins with flu-like symptoms, followed by a painful red or purplish rash that spreads and blisters. Then the top layer of the affected skin dies and sheds.

Stevens-Johnson syndrome is a medical emergency that usually requires hospitalization. Treatment focuses on eliminating the underlying cause, controlling symptoms and minimizing complications.

Recovery after Stevens-Johnson syndrome can take weeks to months, depending on the severity of your condition. If it was caused by a medication, you’ll need to permanently avoid that drug and others closely related to it.

Stevens-Johnson syndrome is an immune-complex–mediated hypersensitivity complex that typically involves the skin and the mucous membranes. Although several classification schemes have been reported, the simplest classification breaks the disease down as follows:

Typical prodromal symptoms of Stevens-Johnson syndrome are as follows:

Patients may complain of a burning rash that begins symmetrically on the face and the upper part of the torso. The cutaneous lesions are characterized as follows:

Signs of mucosal involvement can include the following:

The following ocular signs may be noted on slit-lamp examination:

Minimal dermal inflammatory cell infiltrate and full-thickness necrosis of the epidermis are typical histopathologic findings in patients with Stevens-Johnson syndrome. Histopathologic examination of the skin can also reveal the following:

Ocular examination can demonstrate the following:

Patients should be treated with special attention to airway and hemodynamic stability, fluid status, wound/burn care, and pain control. Therapy for Stevens-Johnson syndrome proceeds as follows:

The treatment of acute ocular manifestations usually begins with aggressive lubrication of the ocular surface. As inflammation and cicatricial changes ensue, most ophthalmologists use topical steroids, antibiotics, and symblepharon lysis.

In the case of mild chronic superficial keratopathy, long-term lubrication may be sufficient. In cases of severe ocular involvement, treatment includes the following:

The goal of pharmacotherapy in patients with Stevens-Johnson syndrome (SJS) is to reduce morbidity and to prevent complications. No specific drug treatment has been consistently shown to be beneficial in the treatment of SJS. The choice of antibiotic for infectious causes depends on the cause of that infection.

Clinical and laboratory evidence suggesting bloodstream infection mandates the use of antibiotics. The most common organisms include Staphylococcus aureus, Pseudomonas aeruginosa, and Enterobacteriaceae species.

The use of systemic corticosteroids is controversial, but may be useful in high doses early in the disease. Morbidity and mortality actually may increase in association with corticosteroid use. For persistent or recurrent ocular inflammation, patients may benefit from short-term systemic corticosteroids and/or long-term immunosuppressive therapy, which may reduce severity of conjunctivitis and improve prognosis quod visum by reducing damage to ocular surface.

Human intravenous immunoglobulin (IVIG) has been described as both treatment and prophylaxis.

Individual lesions typically should heal within 1-2 weeks, unless secondary infection occurs. Most patients recover without sequelae.

The SCORTEN score (a severity-of-illness score for toxic epidermal necrolysis) calculates the risk for death in both SJS and TEN on the basis of the following variables:

In a survival analysis of a cohort of patients with either Stevens-Johnson syndrome or toxic epidermal necrolysis, Sekula et al found that the severity of the cutaneous reaction causing either of these disorders was a risk factor for mortality, but only during the first 90 days following reaction onset.[33] The investigators also found that serious comorbidities and age were risk factors for mortality after 90 days, but not beyond 1 year, past reaction onset. Mortality among patients was 23% at 6 weeks and 34% at 1 year.

Although some patients rapidly progress to lose very large areas of the epidermis in a matter of days, the process suddenly ceases in others and reepithelialization begins a few days later. Predicting the course of disease in a given patient at the initial presentation is not possible. Reepithelialization is usually complete within 3 weeks, but pressure and mucosal areas may remain eroded and crusted for 2 weeks or longer.

Survivors of Stevens-Johnson syndrome may experience numerous long-term sequelae; the most disabling are those of the eye. Cicatrization of conjunctival erosions may lead to the following:

As many as 40% of survivors of toxic epidermal necrolysis have residual potentially disabling lesions that may cause blindness. 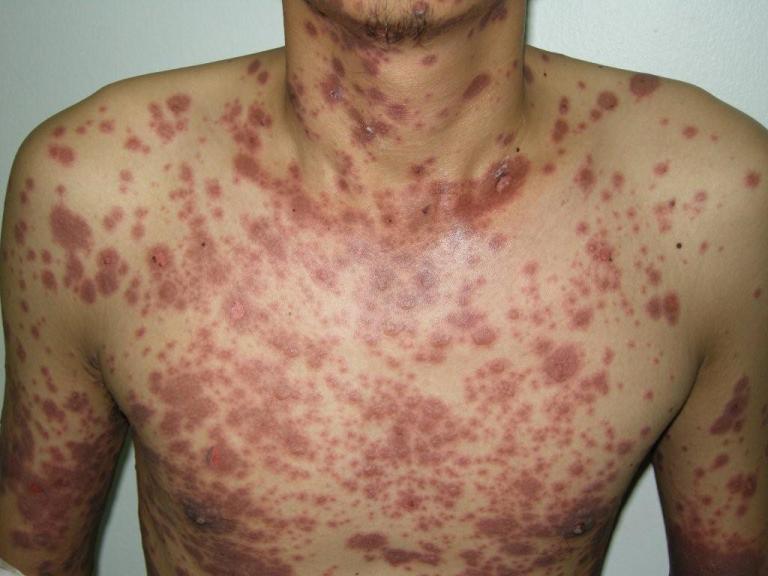 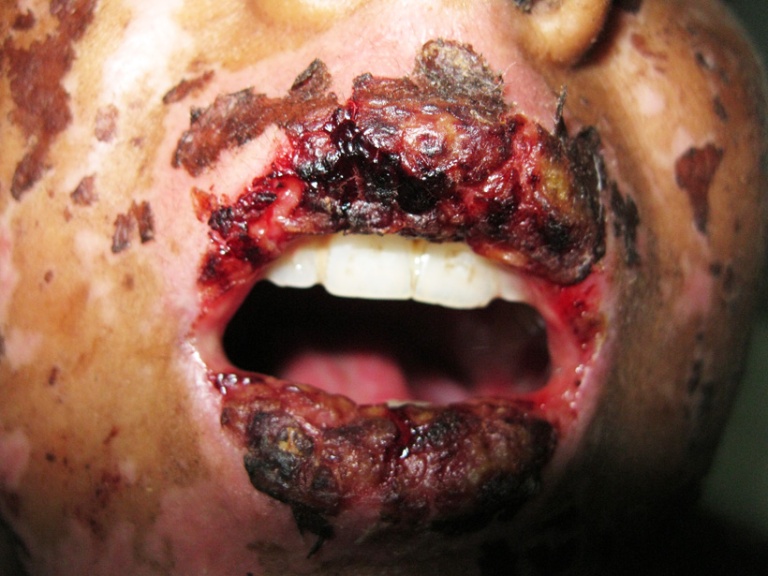