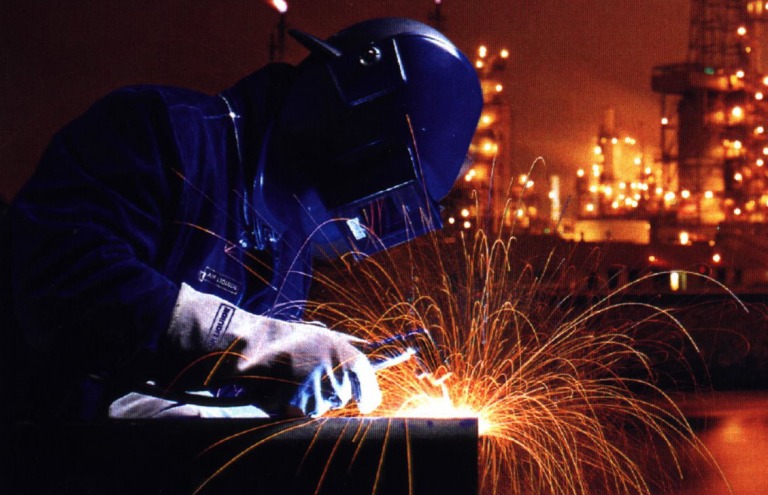 What is welding? Welding is the process of joining metals together using pressure, heat, flame or electric arc. During the welding process, a filler metal and the work piece are heated to form the  weld using  an  electric arc or  combustion gas. Arc welding is the most common form of welding.

As the metal is heated, vaporization occurs and a fine metal fume condenses usually with visible smoke.

Inhalation is the primary route of exposure for the welder. Ninety percent of the welding fumes come from the melting of the consumable electrode (rod) or wire. In the weld, the filler metal used is similar to the metal being welded.

Some electrodes are coated and some wire consists of a metal sheath filled with a flux (flux-cored wire). The coating and flux contributing toward the chemical composition of the airborne fume generated.

Fume composition is a mix of the base metal, flux and consumable wire or electrode used in the weld. Refer to the Material Safety Data Sheets (MSDS’s) provided by the supplier.

Zinc is used in large quantities in the manufacture of brass, galvanized metals, and various other alloys. Inhalation of zinc oxide fumes can occur when welding or cutting on zinc-coated metals. Exposure to these fumes is known to cause metal fume fever. Symptoms of metal fume fever are very similar to those of common influenza. They include fever (rarely exceeding 102o F), chills, nausea, dryness of the throat, cough, fatigue, and general weakness and aching of the head and body. The victim may sweat profusely for a few hours, after which the body temperature begins to return to normal. The symptoms of metal fume fever have rarely, if ever, lasted beyond 24 hours. The subject can then appear to be more susceptible to the onset of this condition on Mondays or on weekdays following a holiday than they are on other days.

Cadmium is used frequently as a rust-preventive coating on steel and also as an alloying element. Acute exposures to high concentrations or cadmium fumes can produce severe lung irritation, pulmonary edema, and in some cases, death. Long-term exposure to low levels of cadmium in air can result in emphysema (a disease affecting the ability of the lung to absorb oxygen) and can damage the kidneys. Cadmium is classified by OSHA, NIOSH, and EPA as a potential human carcinogen.

Beryllium is sometimes used as a alloying element with copper and other base metals. Acute exposure to high concentrations of beryllium can result in chemical pneumonia. Long-term exposure can result in shortness of breath, chronic cough, and significant weight loss, accompanied by fatigue and general weakness.

Iron is the principal alloying element in steel manufacture. During the welding process, iron oxide fumes arise from both the base metal and the electrode. The primary acute effect of this exposure is irritation of nasal passages, throat, and lungs. Although long-term exposure to iron oxide fumes may result in iron pigmentation of the lungs, most authorities agree that these iron deposits in the lung are not dangerous.

Mercury compounds are used to coat metals to prevent rust or inhibit foliage growth (marine paints). Under the intense heat of the arc or gas flame, mercury vapors will be produced. Exposure to these vapors may produce stomach pain, diarrhea, kidney damage, or respiratory failure. Long-term exposure may produce tremors, emotional instability, and hearing damage.

The welding and cutting of lead-bearing alloys or metals whose surfaces have been painted with lead-based paint can generate lead oxide fumes. Inhalation and ingestion of lead oxide fumes and other lead compounds will cause lead poisoning. Symptoms include metallic taste in the mouth, loss of appetite, nausea, abdominal cramps, and insomnia. In time, anemia and general weakness, chiefly in the muscles of the wrists, develop. Lead adversely affects the brain, central nervous system, circulatory system, reproductive system, kidneys, and muscles.

Fluoride compounds are found in the coatings of several types of fluxes used in welding. Exposure to these fluxes may irritate the eyes, nose, and throat. Repeated exposure to high concentrations of fluorides in air over a long period may cause pulmonary edema (fluid in the lungs) and bone damage. Exposure to fluoride dusts and fumes has also produced skin rashes.

Various chlorinated hydrocarbons are used in degreasing or other cleaning operations. The vapors of these solvents are a concern in welding and cutting because the heat and ultraviolet radiation from the arc will decompose the vapors and form highly toxic and irritating phosgene gas. (See Phosgene.)

Phosgene is formed by decomposition of chlorinated hydrocarbon solvents by ultraviolet radiation. It reacts with moisture in the lungs to produce hydrogen chloride, which in turn destroys lung tissue. For this reason, any use of chlorinated solvents should be well away from welding operations or any operation in which ultraviolet radiation or intense heat is generated.

Carbon monoxide is a gas usually formed by the incomplete combustion of various fuels. Welding and cutting may produce significant amounts of carbon monoxide. In addition, welding operations that use carbon dioxide as the inert gas shield may produce hazardous concentrations of carbon monoxide in poorly ventilated areas. This is caused by a “breakdown” of shielding gas. Carbon monoxide is odorless, colorless and tasteless and cannot be readily detected by the senses. Common symptoms of overexposure include pounding of the heart, a dull headache, flashes before the eyes, dizziness, ringing in the ears, and nausea.

Ozone (O3) is produced by ultraviolet light from the welding arc. Ozone is produced in greater quantities by gas metal arc welding (GMAW or short-arc), gas tungsten arc welding (GTAW or heli-arc), and plasma arc cutting. Ozone is a highly active form of oxygen and can cause great irritation to all mucous membranes. Symptoms of ozone exposure include headache, chest pain, and dryness of the upper respiratory tract. Excessive exposure can cause fluid in the lungs (pulmonary edema). Both nitrogen dioxide and ozone are thought to have long-term effects on the lungs.

The ultraviolet light of the arc can produce nitrogen oxides (NO, NO2), from the nitrogen (N) and oxygen (O2) in the air. Nitrogen oxides are produced by gas metal arc welding (GMAW or short-arc), gas tungsten arc welding (GTAW or heli-arc), and plasma arc cutting. Even greater quantities are formed if the shielding gas contains nitrogen. Nitrogen dioxide (NO2), one of the oxides formed, has the greatest health effect. This gas is irritating to the eyes, nose and throat but dangerous concentrations can be inhaled without any immediate discomfort. High concentrations can cause shortness of breath, chest pain, and fluid in the lungs (pulmonary edema). 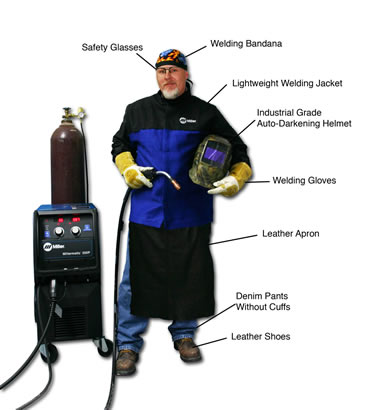 Ultraviolet radiation (UV) is generated by the electric arc in the welding process. Skin exposure to UV can result in severe burns, in many cases without prior warning. UV radiation can also damage the lens of the eye. Many arc welders are aware of the condition known as “arc-eye,” a sensation of sand in the eyes. This condition is caused by excessive eye exposure to UV. Exposure to ultraviolet rays may also increase the skin effects of some industrial chemicals (coal tar and cresol compounds, for example).

Exposure to infrared radiation (IR), produced by the electric arc and other flame cutting equipment may heat the skin surface and the tissues immediately below the surface. Except for this effect, which can progress to thermal burns in some situations, infrared radiation is not dangerous to welders. Most welders protect themselves from IR (and UV) with a welder’s helmet (or glasses) and protective clothing.

Exposure of the human eye to intense visible light can produce adaptation, pupillary reflex, and shading of the eyes. Such actions are protective mechanisms to prevent excessive light from being focused on the retina. In the arc welding process, eye exposure to intense visible light is prevented for the most part by the welder’s helmet. However, some individuals have sustained retinal damage due to careless “viewing” of the arc. At no time should the arc be observed without eye protection.

Fumes are formed when hot metal vapors cool and con- dense into very small particles that stay suspended in the vapor or the gas. The particles may be metal or compounds. And are often smaller that one micrometer the width of human wire, fume may be visible or not. Welding “smoke” is an example of a visible fume. But even if the fume can’t be seen, its particles are still present.

All welding process procedure hazardous gases. Gases are invisible to the eye, and may or may not have odor. The heat in both the flame and the arc, and the ultraviolet radiation from the arc, produce gases such as car- bon monoxide, carbon dioxide, oxides of nitrogen and ozone. Other gases and vapor may be produced as by-product from the breakdown of solvent or coatings on the metals. Gases used for arc shielding, or as a fuel, are also given off during welding.

High Intensity Illumination (Welding Glare), and Heat stress from wearing protective clothing and being subjected to heat from the welding process and NOISE.

If over the years of working as a welder, you breathe in gases, vapor and fumes, it is likely that your health will suffer.

You can reduce the exposure to welding fumes and gases by taking these steps: 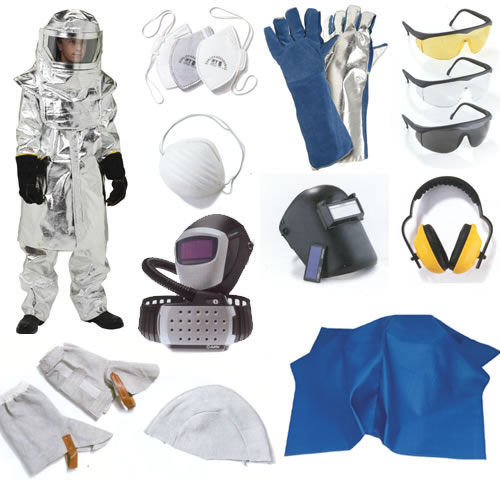